Menu
VIVA LA TRADICIÓN SHOW!
Celebrating the 30th anniversary of Linda Ronstadt’s hit album «Canciones de Mi Padre»
Saturday September 30, 2017 at The Ford Theatres in Los Angeles
Los Angeles. August 22, 2017– Once again you can enjoy the sixth edition of one of the most representative shows of the Mexican tradition in Los Angeles. This year celebrates the 30th anniversary of the most successful album of all time «Canciones de mi padre» by the unforgettable Linda Ronstadt
This spectacular event will take place on Saturday, September 30, 2017 at 8:00 pm at the Ford Theater 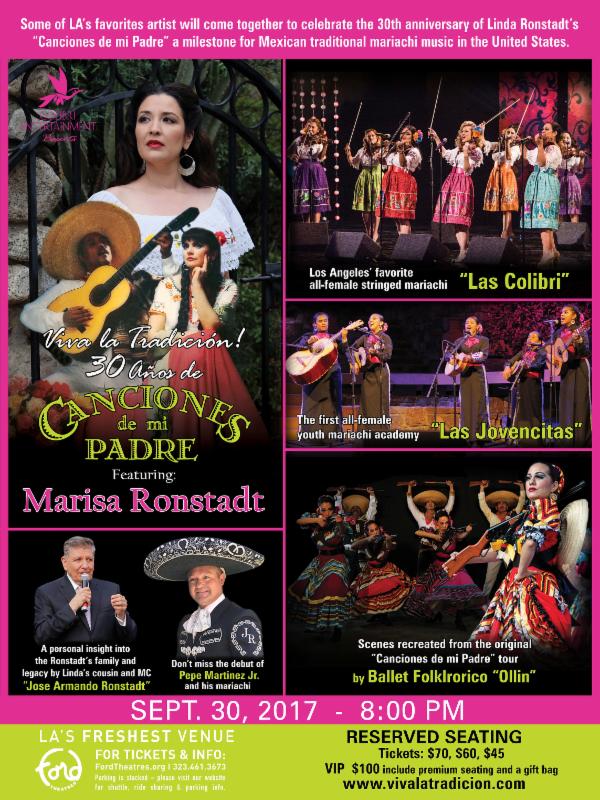 José Armando Ronstadt: Master of Ceremonies will add personal insight into the Ronstadt family and legacy, his cousin Linda’s success and how cultural identity took on a new meaning for Mexican-Americans all because of one multiplatinum-selling album.

WHEN: Saturday September 30, 2017
WHERE: FORD THEATRE  Located at 2580 Cahuenga Blvd. Hollywood, CA.90068. Tel: 323-461-3673
ABOUT THE FORD At 1,200 seats, the Ford Theatres creates an intimate concert experience that is a favorite among Angelenos. Each summer, the Ford hosts a diverse roster of events representing music and dance styles reflective of the communities that comprise Los Angeles County. Ford summer season events are presented in partnership with Los Angeles County arts organizations and producers. Unlike a traditional presenting model, these organizations apply to be part of the season and receive significant marketing, front of house and production support while keeping the majority of box office proceeds. The IGNITE @ the FORD! series is made possible through the generous support of Los Angeles County Supervisor Sheila Kuehl; proceeds benefit the Ford Theatre Foundation. Located in a County regional park in the Hollywood Hills, the Ford is owned by the County of Los Angeles and operated in partnership with the Department of Parks and Recreation and the Ford Theatre Foundation.
The Ford is located just off the 101 Hollywood Freeway at 2580 Cahuenga Blvd. East, Hollywood, CA 90068, between Hollywood and Universal Studios in the Cahuenga Pass. Grounds open two hours before show time for picnicking. In addition to a variety of food and beverages available on site, patrons are welcome to bring their own food and drink (wine and beer are allowed). The Ford is disabled accessible. Portable wireless listening devices are available upon request. The Ford Theatres is a smoke free facility.
Onsite parking at the Ford is limited and stacked. $10 per vehicle, cash only. Carpool and save: three or more people per vehicle pay only $5 for parking for evening shows. A FREE shuttle to the Ford services the Universal City/Studio City Metro Station lot at Lankershim Blvd. and Campo de Cahuenga (excluding Big World Fun and JAM Sessions). The Ford shuttle stops in the «kiss and ride» area and cycles every 20 minutes. For non-stacked off-site parking, a FREE shuttle services the parking structure located at 3330 Cahuenga Blvd. West, Los Angeles, CA 90068 (new); parking costs $12, cash only.
A complete season schedule, directions to the theatre and parking information can be found at FordTheatres.org.
BUY TICKETS
www.vivalatradicion.com
www.FordTheatres.com